Corrosion testing on HVAC coatings can be conducted according to a number of standards, including ASTM-B117, ISO 9227, ISO 12944-6, and ISO 20340. Of these tests, the one we believe represents actual service environments most closely is ISO 20340.

ISO’s testing standards for protective paint systems were developed through long-term material weight loss and surface degradation testing in different corrosive environments. ISO was able to generally classify environments in corrosivity categories of C1 through C5-M or C5-I based upon this loss. Paint systems are typically tested against higher levels of corrosivity because a coating that can protect against the most severe C5-M or C5-I environments is certainly capable of providing protection in a less severe environment. The corrosivity categories are:

When the corrosivity category is known, it can be a useful tool for selecting the right coating for your HVAC/R equipment. However, it is important to note that a coating capable of providing protection at a higher level also protects well at every corrosivity level below the level tested – without impacting coil efficiency. Therefore, to provide maximum chance for equipment life extension AND coil efficiency, it is best to choose a coating with a higher corrosivity category. 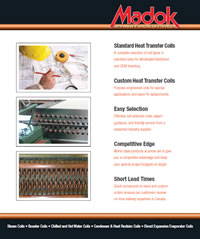 Video: Get to Know Us